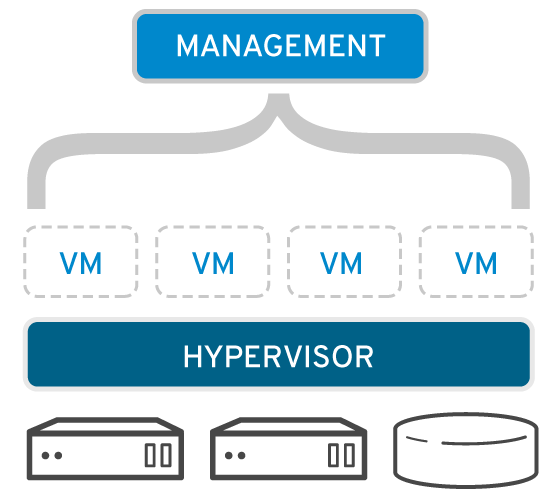 Virtualization: The creation of a virtual resource (server, desktop, operating system, file, storage, or network).  This creation is virtual (not physically existing but created by software to appear to look physical), not actual.  According to javatpoint.com, the concept behind virtualization is "[The] creation of a virtual machine over the existing operating system and hardware is known as Hardware Virtualization.  A Virtual machine provides an environment logically separated from the underlying hardware."

According to Wikipedia, “Hardware virtualization is the virtualization of computers as complete hardware platforms, certain logical abstractions of their componentry, or only the functionality required to run various operating systems.”  In other words, when virtual machine software or the virtual machine manager is installed on the hardware system, it is known as hardware virtualization.  Its purpose is to “virtualize” hardware components such as the processor, memory, and devices (hard drives, DVD/CDROM drives, etc.).  Once the hardware is virtualized, you can install different operating systems that are capable of running in their own instance. You are also able to run various applications and perform tasks.

Server virtualization is when the virtual machine or the virtual machine manager is installed on a server.  Essentially, it masks resources on the central server.  Typically this is used to divide the server into multiple isolated servers (virtual environments) for load balancing and for “on-demand” requirements.  This generally is known as Virtual Private Servers or VPS.

This feature is typically the process of grouping or pooling physical storage devices to appear as a single storage device.  RAID, for example, could be construed as a type of storage virtualization.  Storage virtualization can be done from a single machine or from machines on multiple networks.  An example of use would be for the creation of VPS, back-up or recovery systems, etc.

According to sdxcentral.com, “Network virtualization (NV) is defined by the ability to create logical, virtual networks that are decoupled from the underlying network hardware to ensure the network can better integrate with and support increasingly virtual environments.”  Simply put, when you use virtualization in a network, software virtualization that consists of hardware and software networking resources (switches, routers, etc.) is created.  Physical networking devices forward packets, while the “virtual” network deploys and manages network services and resources.  This is utilized to support virtual environments.

The Benefits of Virtualization In The Cloud

When it comes to the Cloud, virtualization is key.  If you have not yet taken a look at what Sectorlink’s Cloud Pod or Cloud Web Hosting can do you for you, what are you waiting for?  Take a look at how Sectorlink can benefit your online presence today.